Do You Hear The Whisper? “I AM is Here”

Jesus enters the world in His incarnate form with screams of pain from Mary pushing Him forth.

The political landscape surrounding His existence in flesh is volatile and tense.

The Jewish people awaiting the arrival of God’s promised Messiah are weary and eager, maybe even angry for Divine deliverance.

Ongoing noise rings out from society’s hard labor and clamoring just to survive, from being bullied by the Roman government at the time, from struggling to maintain one’s cool and not implode from the pressure of daily life… and in the midst of it all Jesus enters, the cries of pain from Mary drown out by the goings-on in the world, and then her whispered sigh when labor ceased… and there He was.

Luke 2:11-12
Today in the town of David a Savior has been born to you; he is the Messiah, the Lord. This will be a sign to you: You will find a baby wrapped in cloths and lying in a manger.”

Mary and Joseph had but few moments to recover from the ordeal of childbirth, getting themselves cleaned up, somewhat put back together, and settling their infant son into some clean warm wrappings after an initial nursing. Resting their weary bones on the floor of the animal shelter, perhaps leaning back against a wall next to a feeding trough where Jesus napped, they had a stolen space of quiet to let it all sink in and wonder what it was those visiting angels had gone on about.  Did this young couple glance at each other and at the same time burst into giggles at the juxtaposition of heavenly visions and birth rags piled into a corner of a cramped barn stall?  And then deeply sigh and get lost in their thoughts trying to connect all the dots…?

Today, how many of us are plopping down with tired bodies, heavy hearts, scattered minds,  living under oppression of any sort, and are wondering with jaded chuckles how this God with His lofty promises of salvation and power for today and an eternal future of beauty and bliss for His earthly faithful is going to come through?

What difference in the world of 2022 does a baby born in a backyard shed make?  I mean, REALLY?

Joseph in his own exhaustion likely struggled to recall and grasp the words declared to him by the angel:

Matthew 1:20-21
“Joseph son of David, do not be afraid to take Mary home as your wife, because what is conceived in her is from the Holy Spirit. She will give birth to a son, and you are to give him the name Jesus, because he will save his people from their sins .” …

Conceived of the Holy Spirit, born with the cosmic responsibility of saving mankind from sin but born out back on a floor with smelly animals looking on.   Mind bending.

And for us?  Living in uniquely uncertain times, war and terrorism dotting the globe, crazy weather causing disasters, so many people suffering loss that alters heart and mind, social media lying to everyone about worth and truth…yet we who have pledged eternal loyalty to God and His Word and believe His salvation for our sin live shakily trusting that all the injustice faced in our experiences will one day be fully rectified and joy ours forever.  This promise that began to take shape by the birth of Jesus.  Mind bending.

Just as the Savior’s young parents may have begun to doze off, in come a humorous, bumbling band of brothers in the middle of the night.  Why?

Luke 2:8-20
And there were shepherds living out in the fields nearby, keeping watch over their flocks at night. An angel of the Lord appeared to them, and the glory of the Lord shone around them, and they were terrified. But the angel said to them, “Do not be afraid. I bring you good news that will cause great joy for all the people. Today in the town of David a Savior has been born to you; he is the Messiah, the Lord. This will be a sign to you: You will find a baby wrapped in cloths and lying in a manger.” Suddenly a great company of the heavenly host appeared with the angel, praising God and saying,  “Glory to God in the highest heaven, and on earth peace to those on whom his favor rests.” When the angels had left them and gone into heaven, the shepherds said to one another, “Let’s go to Bethlehem and see this thing that has happened, which the Lord has told us about.” So they hurried off and found Mary and Joseph, and the baby, who was lying in the manger. When they had seen him, they spread the word concerning what had been told them about this child, and all who heard it were amazed at what the shepherds said to them. But Mary treasured up all these things and pondered them in her heart. The shepherds returned, glorifying and praising God for all the things they had heard and seen, which were just as they had been told.”

Mary and Joseph in their midnight brain fog are listening with ever increasing clarity to these guys who live in the hills on the outskirts of village life.  Any thoughts that perhaps they’d mistaken what they experienced with supernatural proclamations were definitively hushed.   It was all true!  These shepherds were as lowly in society as they and were also visited by heaven’s messengers!  The words all corroborated.

I can only imagine the stress of Mary and Joseph’s crude birthing situation was slightly forgotten and a joy from beyond re-energized their perception of God’s favor and delight in even their humble circumstance.  In this hole in the wall of Bethlehem, God affirmed His purpose and favor, and reminded them they are SEEN.  Found.  Simply serving Almighty God with their very bodies and trusting Him to finish what this birth of Jesus had begun.  These rag-tag guys straight from the pastures testified to it!  Amazing!

In this moment I can think of too many names of people I know, or know of, who are wondering if they can continue to press through the bewildering, traumatic events their lives have presented.  Feeling sorrowful, unseen, worn down, wondering if their meager faith is being rewarded at all.  I wish I could send them a band of bumblers with a Divine message of hope and affirmation.  I can’t.  God can.  In different ways than the limits of my imagination can’t even fathom.

I can pray – for God’s love to break through and transform.

I can celebrate that there IS a victorious end game promised by a God who sends a Rescuer through a humble virgin.

I can be grateful for the power of God’s Word which will be proven 100% true and just.

I can hug and bless the people in my life God has blessed me with.

I can know that, “…hope does not put us to shame, because God’s love has been poured out into our hearts through the Holy Sprit, who has been given to us.” Rom 6:5

Have you ever started a book and halfway through, you can’t stand the suspense, so you peek at the latter chapters just to make sure your favorite character(s) make it?  You might think I’m a weirdo, but around Christmas time, when most are focusing on the beginning of our Rescuer’s active mission, I can’t help but read through Revelation and take in what His final victory with His beloved faithful followers in His company will look like.

Jesus accomplished what He came for.

Jesus came to Rescue US – with His incarnate flesh and blood.

There’s no way He did all that only to  abandon us to the whims of an evil world.

He is preparing our place with Him in eternity.

He will right ALL wrongs.

He hasn’t left us alone – through His Spirit, He is here. 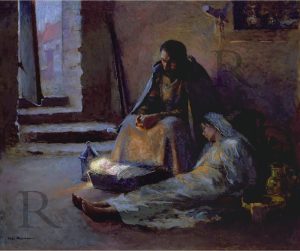 ← When Advent Triggers Longing
What Do You Want To Accomplish This Year? →

One Comment on “Do You Hear The Whisper? “I AM is Here””